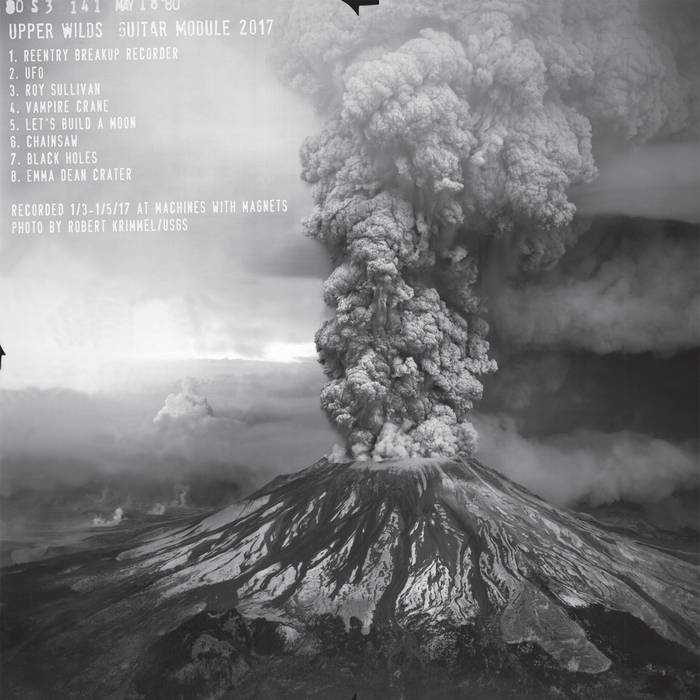 Upper Wilds is the new band of Brooklyn-based musician Dan Friel (Parts & Labor). Friel’s calling cards are his heavily distorted textures and addictive melodies. These high intensity pop songs are reminiscent of label mates Lightning Bolt, with whom Friel toured in 2015. However, where Lightning Bolt's vocals are heavily distorted, Friel’s tend toward the soaring style of pop/punk vocalists. The limited LP Guitar Module 2017 was recorded with Friel playing all the guitar and keys and for the first time since Parts & Labor, singing. Captured by the engineering team at Machines With Magnets (Battles, The Body), Guitar is an overdriven soundtrack for powering through dark days, and a sweaty summer anthem that should be played LOUDLY.

Recorded by Seth Manchester, Guitar Module 2017 was performed by Friel himself using an open tuned Hagstrom guitar, an Akai MPC500 sequencer, his trusty Yamaha Portasound keyboard, and an array of pedals. The album’s distorted keys and drum programming are driven by its visceral guitar lines; together, the instruments are the molten bedrock for Friel’s soaring vocals. The resulting songs are anthems for catharsis and escape. References to space appear throughout, from found sound samples of satellites falling from orbit on “Reentry Breakup Recorder” to their breakup into the sea and the end of the track. The darkness of “UFO” describing the oceanic pole of inaccessibility (the farthest point from land, site of the international spacecraft cemetery where discarded satellites and space stations get dropped into the ocean) is contrasted by “Black Holes,” a wry flip of the “we are all made of stars” Moby/Carl Sagan thing. In it, Friel urges us to resist seeing the worst in everything. “Let’s Build A Moon” riffs a Swell Maps song title and turns dark urban realities, let’s plan an escape route, into good fun. Upper Wilds cleverly turns expectation on its head, finding humor in apocalyptic scenarios or in the bubble dweller delusions (“Chainsaw”). Clever reference points, distortion and tension, and an utter allegiance to the pop song create a singular world covered in craggy space debris and ultraviolet melodies.

Guitar Module 2017 serves as a launching point for Upper Wilds, a band comprised of Friel on guitar and vocals, bassist/vocalist Zach Lehrhoff (Ex Models, Pterodactyl) and drummer Aaron Siegel. This summer and fall, Friel’s distortion-heavy anthems will breathe beyond the studio in the DIY spaces of Brooklyn and beyond. Just as the ash and smoke billow from the maw of Mount St. Helens on the cover, Upper Wilds’ music blasts forth blanketing you in the density of their sound and inviting you into the abandon of chaotic energy and unbridled joy.

This is big, distorted music intended to played loudly, on speakers. Your friends at Upper Wilds and Thrill Jockey do NOT recommend you listen this on earbuds, your phone, your lap top.